As part of my effort to photograph several places in the Orange County Open Spaces for the Irvine Ranch Conservancy, I was tasked with producing an image suitable for a 48ft x 8ft. wall print for the conference room. There were some very real challenges in achieving this. To appreciate the final result, take a look at the failed attempts illustrated here. As you can see in the image, the scene down at the beach does not easily support the aspect ratio of the wall. The yellow outlines show the necessary crop of each of the assembled images at this extreme 6:1 aspect ratio.

It looked as if the third shoot was finally going to produce a good image, but with the layout of the conference room, the water would not have been visible from the seating area. The only choice was to shoot further to the right. The problem there is that the scene consists only of water waves and sky in that direction, which results in an impossible effort to get the images stitched together due to their “non-unique” content.

Perhaps by luck the fourth attempt at acquiring the necessary pixel quantity and scene content, was greatly aided by a low tide condition. I was finally able to pan the camera as far to the right as desired because the detail of the rocks and tide pools was visible. This meant that the individual photos had unique detail and could therefore be stitched together successfully. 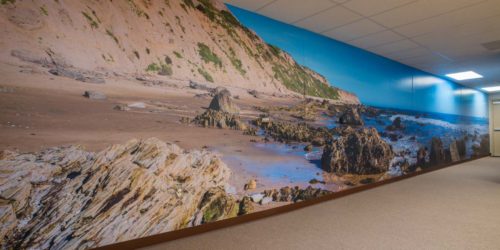 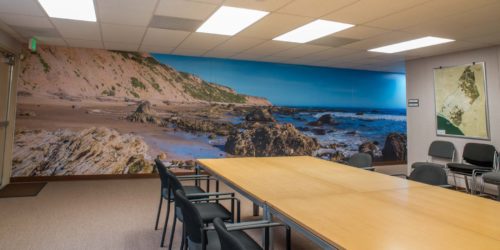 That is of course the simplified version of the task in putting these 85 images together. The blending of the waves from redundant shots at many locations, and multiple sets of focal planes for near and far content resulted in a few weeks of effort.

It is completely amazing in size and detail, but I’m glad it’s done. John at the IRC deserves a lot of credit for spurring me on throughout difficult process of producing this image.

This site uses Akismet to reduce spam. Learn how your comment data is processed.

The size of the Image (pixels) determine the level of sharpness and clarity for print applications.   For more discussion on this, refer to: What Is High Resolution?.  In general, 300 pixels/inch (or dpi) produce a high quality print.  For larger wall murals where the distance of the viewer is greater, much lower dpi numbers will produce a good result.